We Rent The Good Stuff! 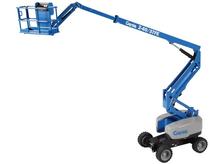 These telescoping boom lifts are built for the outdoors. The four-wheel drive allows you to drive over rough and uneven terrain; the wheels have great traction so you don’t have to worry about getting stuck if you’re working in the dirt and sand. It extends to 85 feet but is tight enough to be steered through compact spaces. Here are some of the boom lift’s greatest features. 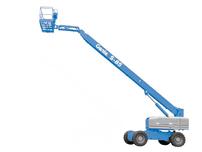